Foundation of IODA Pakistan in Lahore

At the beginning of March, I had the opportunity for a very special trip. I went to Pakistan, to the cultural capital Lahore, one of the big cities in the province Punjab. I was invited by our IODA colleague Irshad Ahmad Mughal. Our acquaintance dates back to 2001, when Irshad received a scholarship from our host team for the World Conference in Dresden. We’ve been in touch ever since. Last year Irshad managed to attend another IODA World Conference. All of you who were in Cape Town have come to know and appreciate the friendly, ambitious, experienced colleague. 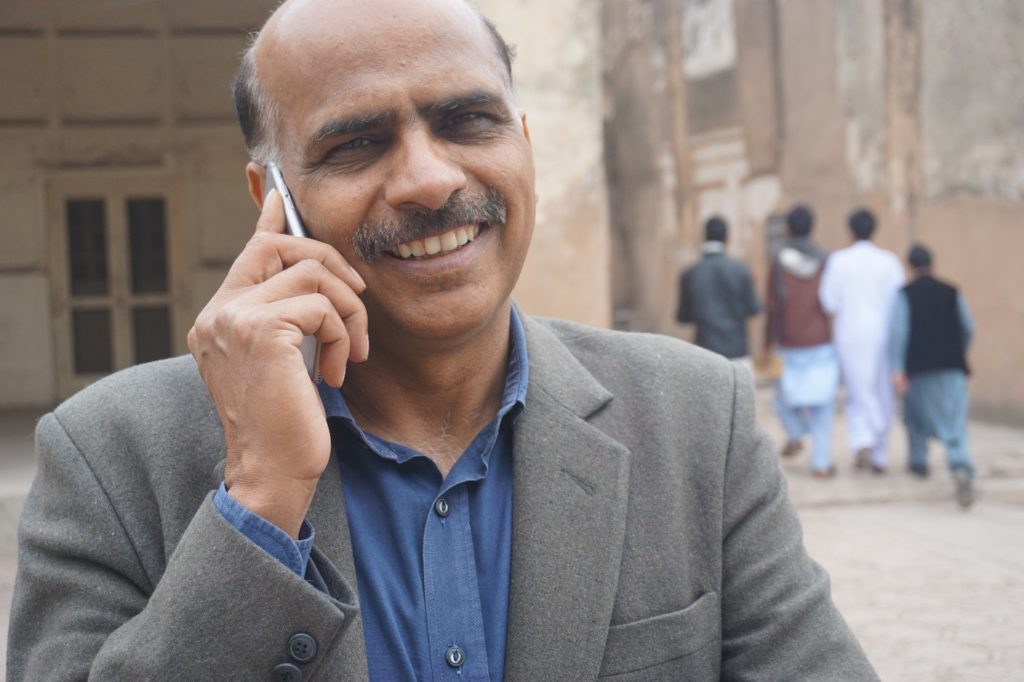 Anyone who knows Irshad knows that he persistently pursues visions and goals. He had to stand on his own two feet very early on. He has done much effort to have been able to study and, even as a competitive athlete, he has gone beyond his limits again and again. No wonder Irshad finally convinced me to visit his Pakistan. Of course, I was excited and curious, I didn’t really know what to expect in terms of safety, for example.

I tell you, I had only wonderful experiences. The journey has filled me deeply. I lived in Irshad’s family, who welcomed me as a natural family member with exceptional hospitality. Everywhere I was greeted with joy and honor in a way that was beyond my imagination.

The next picture shows how I was welcomed on our way to Irshad’s home village. A football club presented its best talents and had prepared breakfast for us. I was greeted with odorant red roses. 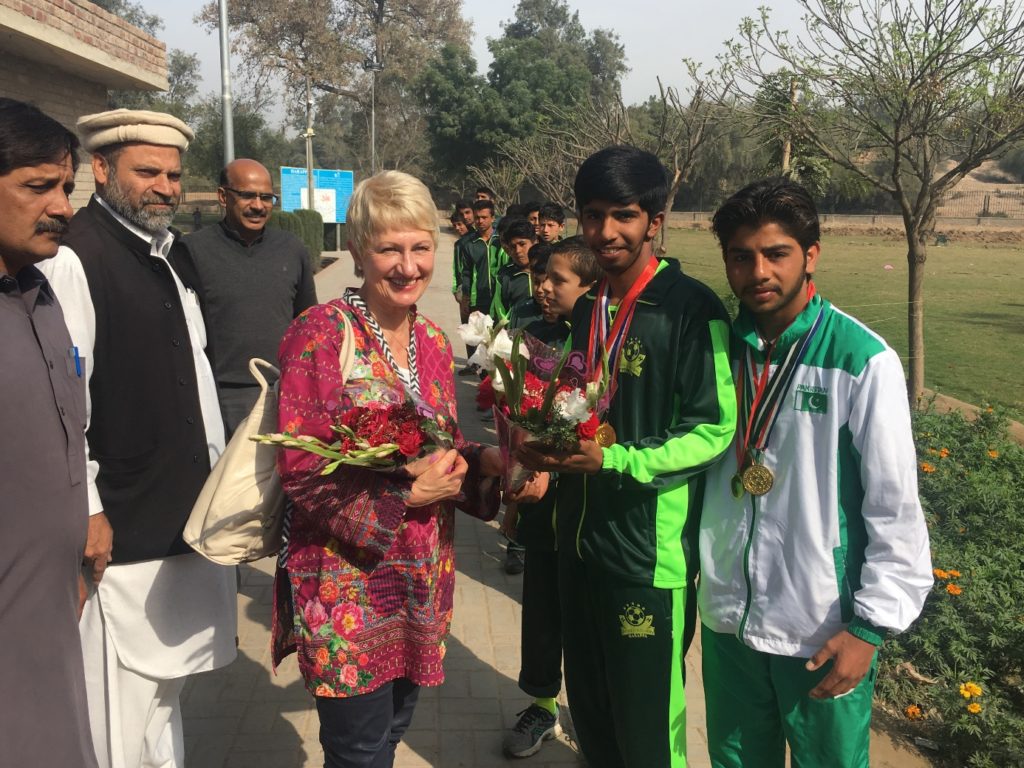 Irshad had put together a demanding program. He organized a professional exchange at Telenor, the largest telecommunications company in Pakistan. We established a cooperation relationship with Superior University Lahore. A visit of teachers in Dresden is already in progress. 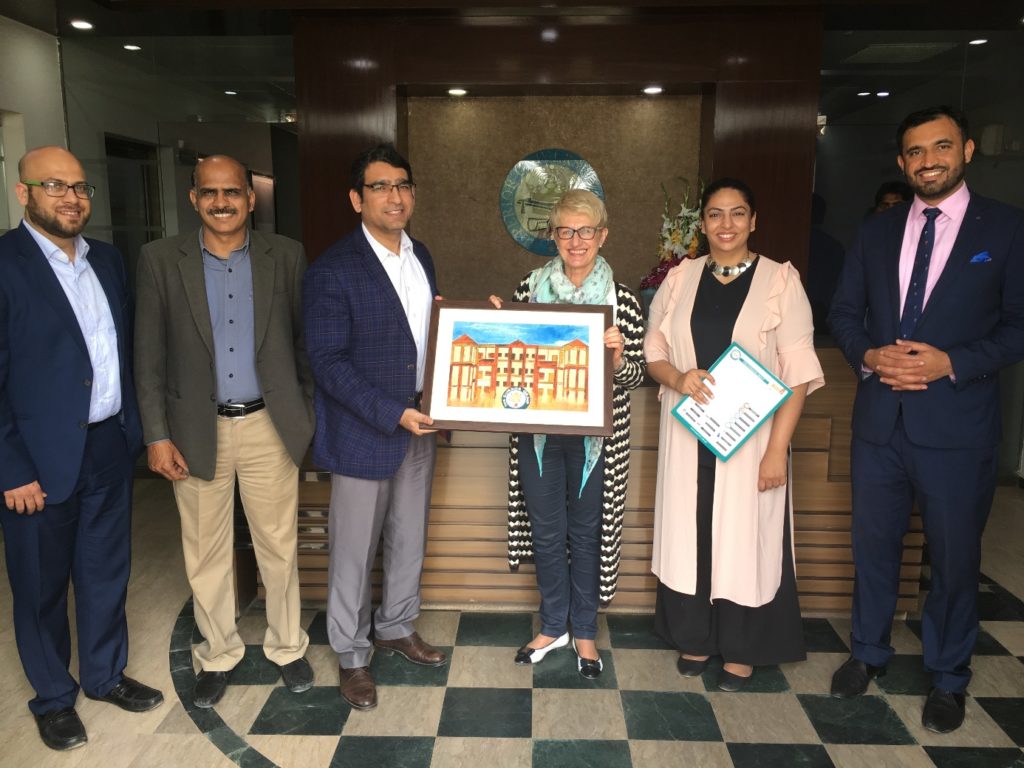 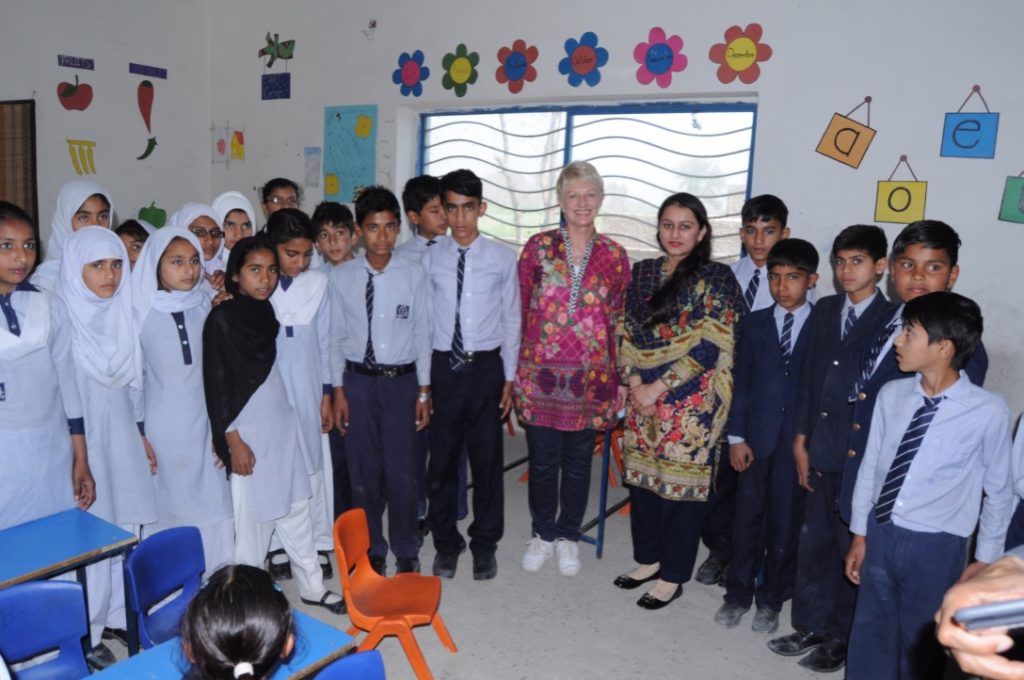 Visit in Irshad’s school project. So, education is possible for children in the rural area he came from.

We were invited to the TV station Neo TV.  We visited the school that Irshad built by raising donations in his home village. We were guests at the Football club where Irshad is the coach for youth teams and we met with Pakistani colleagues and enjoyed also the cultural heritage. First activities were planned: This summer talented young footballers will come to a summer football camp in my city Dresden, Germany, under Irshad’s company. 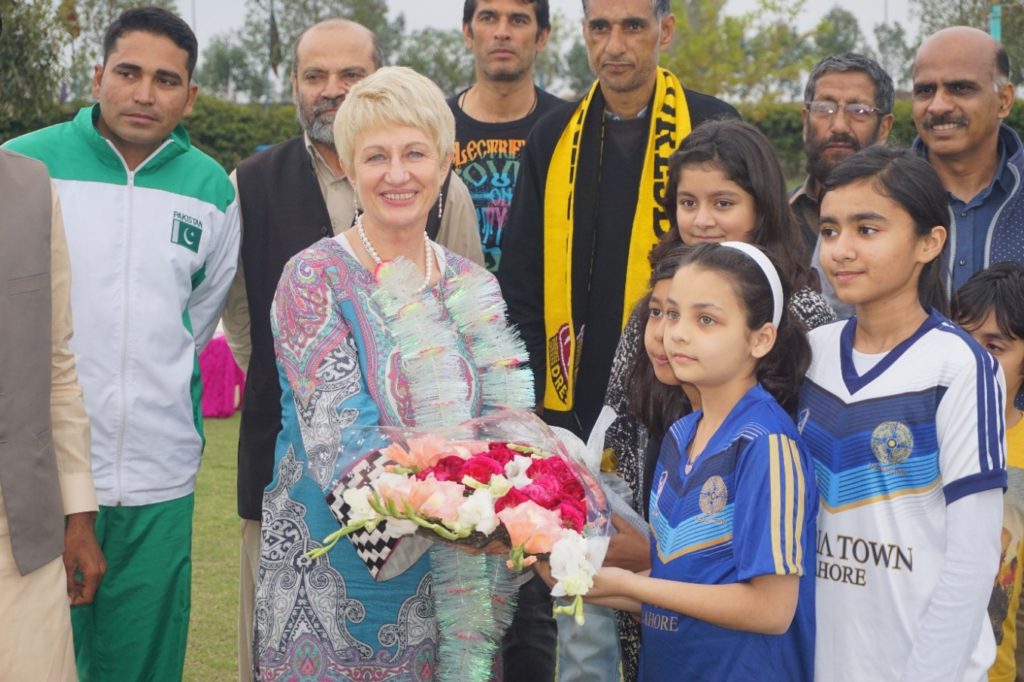 Invitation to the Bharia Town Football Academie Lahore. Irshad’s sons were playing for the opponents.

On Saturday, 03.03.2018, at the end of my stay, the trip took its climax: We founded the IODA Pakistan team with Irshad as the founding father. The first members are Aniq-ur-Rehman and Anees Ahmad Khan Lodhi. In my role as Global Ambassador of IODA, I took on the role of founding godmother. 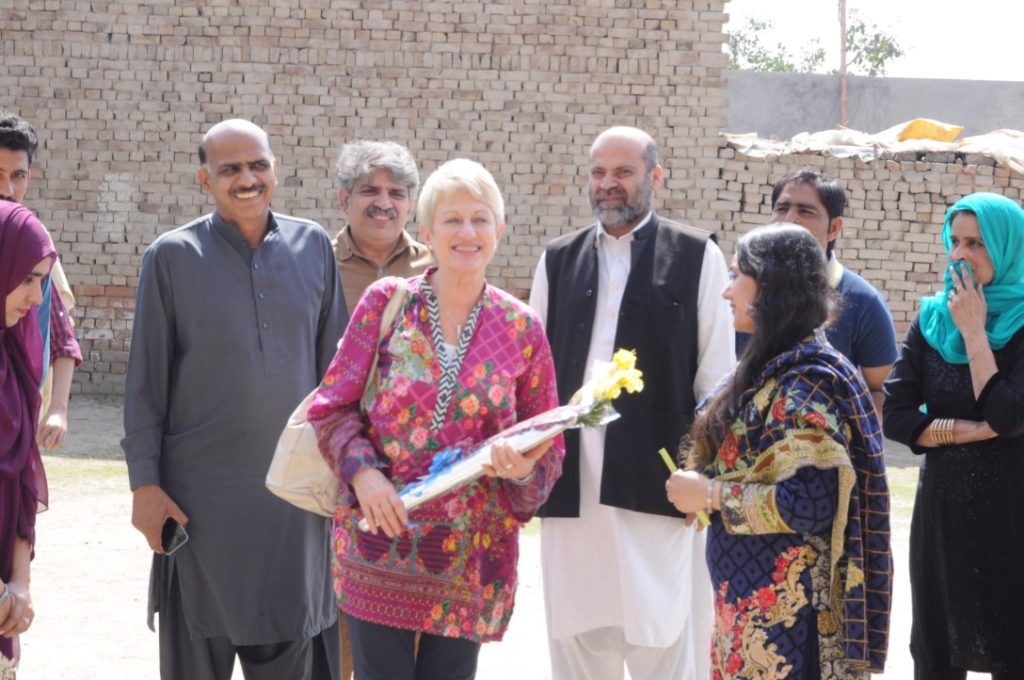 The new IODA Pakistan team has a wonderful vision and big plans: It offers to host the IODA World Conference in 2021 or 2022. I would like to support them wholeheartedly. Lahore is the perfect place for that. I felt very comfortable and safe everywhere. Lahore is, by the way, the twin city of Indian Delhi. Both Lahore and Delhi belong to Punjab. The province was divided into two parts, a Hindu (Delhi) and an Islamic (Lahore) after decolonization and the uncontrollable religious disputes. Delhi was the administrative capital while Lahore hosted art and culture. Lahore, for example, owns the largest walled city in the world. I was impressed. I’m sure you will be exactly.

Irshad and his colleagues will come to Istanbul for this year’s IODA World Conference. I look forward to a fruitful dialogue and hope for your support for the plans of our Pakistani IODA team.

For these unforgettable memories I would like to thank Irshad, his family and friends as well as our colleagues from the new IODA Pakistan team.

IODA is a wonderful place to exert personal influence on peaceful thinking and friendship between people of different nations and religions. I would like to encourage you to use the infrastructure that we have created in our organization even more for networking and collaboration across boundaries.

See you in Istanbul! 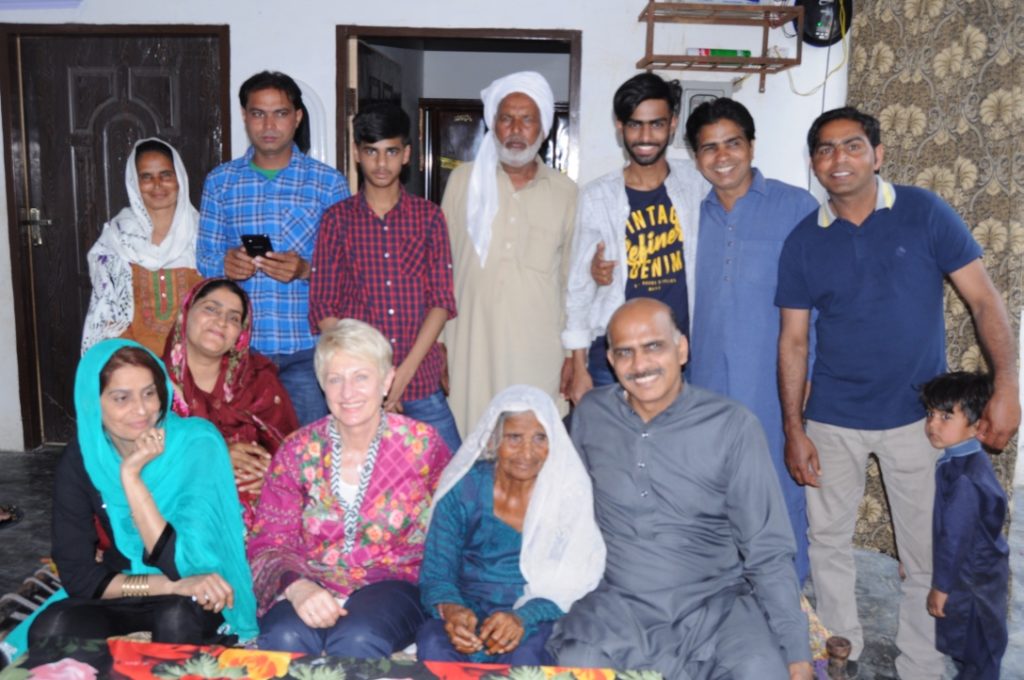 A small part of Irshad’s large family: from the viewer side left beside me is his wife Nasreen, between Irshad and me his mother (104 years old) is sitting, directly above Irshad on both sides of his brother-in-law with turban are Irshad’s sons – right Saadi Gohar (16) and left Raazi Gohar (14), beside him left is their cousin; on the right stands Irshad’s younger brother – the man without a beard in the blue Shalwar Qameez, on the far right stands Irshad’s nephew Khalid Farooq (Urdu teacher at school) and on the other side Khalid Farooq’s brother Saiful Malook. On the left are two women, the far left is Irshad’s niece, the one with a smiling face is his sister-in-law. A very loving and caring family!